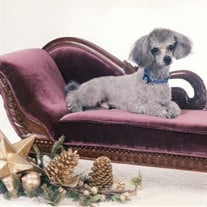 Copy the text below and then paste that into your favorite email application.

Rayburn Bryant age 18 of Rockford, passed away Tuesday, November 24, 2015. He was a Toy Poodle born in Knoxville, TN on September 18, 1997 and came to live with us that Christmas. Since then we have slept most every night together (and many lazy afternoons.) He was definitely a mama's boy! Throughout his 18 wonderful years, Rayburn retained his puppy personality. He loved his toys, especially ones with a squeaker, and he could usually be found lying on the back of the couch or buried deep under the covers on the bed. Rayburn loved to go bye-bye and enjoyed a good howl. He was our BFF, our door bell, our vacuum when Logan was small, and the BEST Christmas gift, EVER! Thank you David for bringing him into our lives, we loved every single minute we had with him. He moved to Atlanta in February of 1999 for a year, with his mom while she went to mortuary school. In 2003, he welcomed his one and only human brother, Logan, and in 2004 he was not so excited about welcoming his Chocolate Lab sister, Abby. In addition to Logan and Abby, he leaves behind his mom and dad, Jenni and David. We will forever miss the sound of his little nails on the hardwood floors. He was cremated and will be buried with his Mama at hopefully a much much later date.